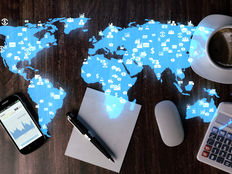 U.S. markets have been pushing toward new highs as both domestic and international investors flocked to this outperforming area of the globe. However, many are overlooking the potential opportunity in relatively cheap international stocks and related exchange traded funds.

According to Treasury Department figures, foreign private holdings of U.S. equities reached a record of $7.7 trillion as of July, the Wall Street Journal reports. It should be noted that the data for foreign funds excludes sovereign-wealth funds and central banks, so overall international holdings could be even higher.

The S&P 500 has outperformed the world stock market in nine of the past 10 years, and most investors are betting that U.S. equities can maintain this outperformance.

“What’s happened in the last 10 years is that high returns have also been associated with the safety that comes with the U.S.,” Paul Sandhu, head of multiasset quant solutions for Asia-Pacific at BNP Paribas Asset Management, told the WSJ. “Usually when you think of safety, you equate that with low returns. But that hasn’t been the case.”

However, investors are ignoring the potential diversification and cheap valuations found in international stocks. For instance, the iShares MSCI ACWI ex U.S. ETF (ACWX A-), which tracks the MSCI ACWI ex USA Index, was trading at a 14.1 price-to-earnings and a 1.5 price-to-book, compared to the SPDR S&P 500 ETF (SPY A) that shows a 18.6 P/E and a 3.2 P/B.

While the valuation gaps might reflect expectations for faster profit growth in the U.S. and the steadier record of earnings growth, bargain hunters could be tempted to switch out to international stocks if the perceptions improve for other markets.

Gerry Fowler, an investment director and global multiasset strategist at Aberdeen Standard Investments, revealed the firm has in recent weeks put more money global equities with an emphasis on Europe as several indicators showed that the global economy may be past its low point.

“A cyclical upturn can have more of an impact in Europe than elsewhere,” Fowler said.