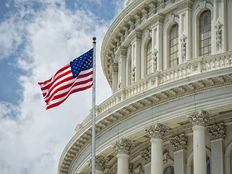 Investors Leaning Towards U.S. So Far in June

Halfway through the year, the penchant for investors to pour into U.S. equities over international markets is continuing thus far in June, according to the latest Relative Weight Spotlight from Direxion Investments.

Despite a number of roadblocks heading into 2019 after a rough fourth-quarter market showing to end 2018, the U.S. economy rebounded in the first quarter this year, beating analysts’ expectations of 2.5 percent growth with a 3.2 percent growth number. As such, investors have been quick to lean on the U.S. even if a trade deal with China went sideways in May.

“Relative flows between U.S. and International ETFs have moved in the same direction as relative performance in 8 of the last 12 months, with February, March, April and May 2019 all seeing ETF flows align with monthly performance,” the Relative Weight Spotlight post noted. “May saw the largest relative strength in flows in favor of International stocks since March of 2018, with U.S. ETFs seeing almost $16.0B in net redemption activity while International ETFs saw over $2.2B in net creations.”

“June has seen this trend continue with U.S. stocks outperforming International shares, and ETF investors are sharply moving back to the U.S. after redeeming throughout the month of May,” the post added. “Over the first 7 trading days of June, ETFs specifically targeting exposure to the U.S. have taken in $4.64B more relative to International ETFs, indicating that relative strength in flows has quickly returned in favor of domestic exposure.”

The fund’s long positions include holdings that helped the S&P 500 and Nasdaq Composite reach highs like Apple and Microsoft, which just hit $1 trillion in market capitalization.

China Putting Up a Fight

However, the IMF projected a growth forecast of 6.3 percent, lowering their initial expected growth rate of 6.2 percent. They’re expecting that to slow further in 2020 to 6 percent and even lower to 5.5 percent by the year 2024.