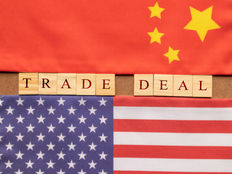 Investors May Look to EM ETFs to Play US-China Deal

Emerging market ETFs like the iShares Core MSCI Emerging Markets ETF (IEMG A) and Vanguard FTSE Emerging Markets ETF (VWO A) have been among the hardest hit in the wake of the U.S.-China trade war, and as things are appearing to turn around, some investors may be willing to step back in to this global market segment.

“We have held a cautious view on the outlook for equity markets for much of this year … however, the environment has shifted in recent weeks” Patrik Schowitz, global multi-asset strategist at the fund manager, told Reuters. “That change likely reflects several factors, which we think has some more room to run.”

Among the global markets, emerging market equities were the favored pick, Schowitz added.

UBS was also showing a more favorable outlook on the developing economies, shifting away from its underweight in emerging-market stocks and moved its overall position on equities to neutral.

Furthermore, Morgan Stanley upgraded emerging-market equities to equal weight from underweight on an improving global growth outlook outside the U.S.

Rabobank also saw indications of global shifts, notably the divergence between the MSCI emerging-markets stocks index and the S&P 500 Index against the MSCI Emerging Market Currency Index, which rose together over September and October and was unlikely to last.

“Either EM stocks will start to outperform U.S. equities and the ratio rises sharply or the MSCI EM FX Index falls,” Rabobank said.