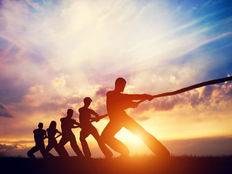 It’s been looming up there for some time. The big one: 3,000. I’m talking about the S&P 500 key resistance level that most every trader is eagerly watching.

“A lot of people are focused on the 3,000 level which is human nature, it’s a big round number,” Miller Tabak equity strategist Matt Maley told CNBC’s “Trading Nation.” “But, the most important thing to look for is can it get a more meaningful break. … It’s nosed above to new highs on several different occasions in the last 18 months. But, each time it’s kind of rolled back over.”

More important than just breaking a key resistance number though is how the market approaches and penetrates that number. Rather than just touching the number and reversing quickly, if the market shatters the 3000 resistance, plodding higher to exceed it on a percentage basis before pulling back, that would be much more significant.

“Right now we need more than a 2% breakout like we’ve seen in the last couple of times. We need something more in the 3% range and that takes us up to about 3,030 so that’s kind of the level I’m looking at,” said Maley.

“We have the economy weakening a little bit, earnings growth full-year estimates are less than 3% now, we’re going to need a kind of prove-me, a show-me [move], and get a more meaningful breakout to show that this market can really move a lot higher,” said Maley.

“We believe that equities at this point do remain well supported. You have a U.S. economic backdrop that is continuing to improve, albeit at a more decelerating rate of 2% to 2.25%. That supports the earnings as well as revenue expectations for the S&P 500 going into 2020,” Morganlander said during the same segment.

Back when the S&P 500 hit another major milestone, 2000, the index briefly rose past 2,000 on a Monday, but closed just below that level. It still set a record-high close in the process.

Other major milestones for the index, which began in 1957, were:

Feb. 2, 1998 when the index closed above 1,000 for the first time, driven by optimism that financial markets were stabilizing as a financial crisis in Asia passed.

Oct. 9, 2007 when the S&P 500 closed at an all-time high of 1,565.15. Traders and investors speculated that the Federal Reserve would cut interest rates to help a U.S. economy threatened by signs of an emerging credit crisis. The October record remained stalwart for five and a half years as the stock market lost more than half of its value in the financial crisis and Great Recession that followed, eventually bottoming out at 676.53 in March 2009.

Only time will tell how the historic index handles the 3000 level, but investors looking to participate in a perceived upside continuation can participate using broad market ETFs.