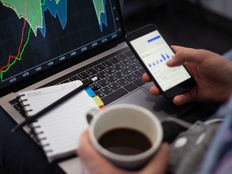 The last time the S&P 500 had a first half of a year this good was at least 10 years ago. The Dow Jones Industrial Average hasn’t seen a June like this since 1938. But despite the surface performance, underneath this impressive rally is a trend that continues to irk investors, economists, and analysts, according to J.P. Morgan.

From consumer discretionary to technology, cyclical stocks that typically are tied to economic growth have yet to recover the ground lost in May, whereas only defensive groups like consumer staples and utilities have confirmed the S&P 500′s new highs, J.P. Morgan’s chart analyst Jason Hunter pointed out. This is not the way a solid, enduring rally should occur explains Hunter.

“Rally leadership doesn’t inspire a lot of confidence yet … In our view, that cross-market divergence can only persist for a short period of time, and the S&P 500 Index rally potential is limited under the current conditions,” Hunter said in a note on Tuesday.

No doubt, investors are feeling this irksome sensation as well, with consumer sentiment suffering recently.

The Conference Board’s Consumer Confidence Index tumbled to 121.5 in June, dropping from a downwardly revised reading of 131.3 in May and snapping three consecutive months of improvements.

June’s results missed consensus expectations for a reading of 131.0, according to Bloomberg-compiled data, and pegged the lowest level in nearly two years.

In reality, the market’s robust comeback in June has more to do with expectation and less to do with economic fundamentals. It’s substantially driven by Fed Chairman Powell’s posturing and a shift in the Federal Reserve’s monetary policy, as well as renewed hopes for a trade deal between the U.S. and China, as the market ebbs and flows with the president’s every tweet. The persistent weakness in cyclical stocks that traditionally correlate to economic health though could be especially worrisome, as corporate profit picture continues to deteriorate.

The S&P 500 consumer discretionary sector has consistently faltered behind the S&P 500 consumer staples sector ever since last October. For the bull run to last, cyclical stocks generally have to take the lead in the rally, according to the analyst.

“We do not believe the divergence between Cyclicals and Defensives can persist if the S&P 500 Index is set to extend the rally through the summer. In our view, either cyclical markets need to start outperforming and take the leadership role in a rally, or the broad equity market is vulnerable to a material setback,” Hunter said.