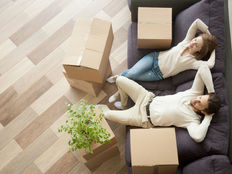 A large jump in interest rates last year, combined with all-time high home prices has made finding a house for new home buyers particularly onerous. But now a rise in rental properties is making pickings even slimmer according to new data.

Roughly two years ago housing inventory hit a record low, but languishing home sales over the past year helped build back much-needed supply, especially in the mid-level range. Then this summer a precipitous drop in interest rates brought demand back and has eaten up that supply dramatically.

According to realtor.com, national housing inventory fell 2.5% annually in September, a sharper drop than August’s 1.8% decrease.
Supply has always been most anemic where prices are lower, as investors have been very active in that price range since the foreclosure crisis.

But a key factor making demand even leaner is now roughly five million mostly entry-level homes have been turned into single-family rentals, and robust demand for those rentals means investors are unlikely to put the homes up for sale anytime soon.

Lower mortgage rates are adding further fuel to the fire. The average rate on the 30-year fixed surged over 5% last November and stayed above 4.5% through March, according to Mortgage News Daily. That made for a lackluster spring housing market, traditionally the busiest time for buying. But rates then began falling again in May and dropped quickly in July and August. The beginning of September saw the average rate at around 3.5%, and sales of both new and existing homes came roaring back.

“If, or better yet, when inventory in this segment begins to take a downturn, the vast majority of homebuyers are going to feel its effects as their options rapidly dwindle,” said George Ratiu, senior economist for realtor.com. “September inventory trends, especially in the mid-market, may be the canary in the coal mine that we could be headed for even lower levels of inventory in early 2020.”

In addition to low supply, fewer new homes are being built as well, further spurring demand.

“It’s not just the overall supply of new construction that’s gone down, but the supply of starter homes, so it’s the affordability challenge at the entry level that’s been a particular challenge,” said Robert Dietz, chief economist for the National Association of Home Builders. “Right now only about 10% of newly-built home sales are priced under $200,000. Five years ago that share was 1 in 5, and 10 years ago it was 40% of new home sales were priced under $200,000.”

Investors looking to use ETFs to take part in the housing demand could consider the SPDR S&P Homebuilders ETF (XHB A+), which is up nearly 34% year-to-date and with earnings season looming, homebuilder ETFs have a chance to extend their 2019 paces.