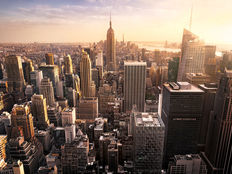 Every market move as of late has been mostly about trade wars and yield curves, but the Russell 2000 small cap index could be telling its own story. What small cap equities are doing could be a strong indicator of where the next market move is headed.

“The Russell 2000 small-cap index has been a great leading indicator for the stock market in both directions, and we saw it last year before the big decline in the stock market in the fourth quarter, ” said Matt Maley, equity strategist at Miller Tabak.

“When the Russell 2000 rolled over and broke to a new lower low, that’s when the whole market started to really fall out of bed, and we’re seeing a similar situation right now,” said Maley. “When the S&P went to make a new high [in July], the Russell failed to do so, and now it’s rolling back over and it’s testing its June lows.”

The payment processing space is seeing a growing number of big bets placed by venture capitalists, which could give financial technology exchange-traded funds (ETFs) a boost. It’s a $1.9 trillion industry that the largest tech firms are trying to tap into.

Payments are increasingly going digital with a number of start-ups seeing venture capital seed money to help facilitate online purchases. According to research company Pitchbook, data shows that investors put $18.5 billion into the payment processing sector in 2018–an increase of five times the previous year.

That influx of investment capital was spread over 235 deals compared to 258 in 2017. China’s Ant Financial was responsible for raising $14 billion in 2018, which shows its confidence in the payment processing space.

A number of mergers and acquisitions have already taken place, such as the following:

ETFs to look at in the growing fintech space include the Global X FinTech ETF (FINX) and the ARK Fintech Innovation ETF (ARKF). Both ETFs are up year-to-date–FINX is up 22 percent and ARKF is up 5 percent.

Contactless payment systems typically fly under the radar, but more popular applications like Apple Pay are drawing more attention to the industry. Prior to the FIS purchase, Fiserv agreed to buy payment processor First Data for about $22 billion earlier this year.

The purchase of Worldpay would give FIS a large footprint in the e-commerce market given that the former is responsible for facilitating 40 billion transactions per year.