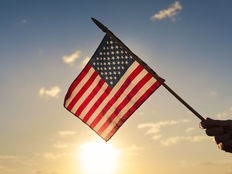 The aim of that index is to deliver 100% net long exposure via a 150% long position in U.S. stocks and a 50% short position in ex-US equities. RWUI’s top five international short positions are Japan, the U.K., France, China and Germany.

Ongoing trade negotiations between the U.S. and China, which have revolved around a wide range of issues, such as forced technology transfer as both are working feverishly to bring the trade war to an end. U.S. President Donald Trump has already imposed tariffs to the tune of $250 billion of Chinese imports in 2018.

In particular, the tariffs were meant to force China’s hand in changing its business practices, particularly when it comes to issues, such as intellectual property–all as a means to get China to open up its economy to more foreign investors.

“U.S. revenues and earnings outpaced International in every quarter of 2018, helping drive U.S. stocks ahead of their non-U.S. counterparts by 8.79%,” according to Direxion research. “Thanks to a 2.83% return compared to a 1.51% return in April, U.S. companies continue to outperform International ones bringing the year-to-date advantage to 5.40% and the trailing one-year spread to a whopping 15.53%. Over the last ten years, the U.S.’s 14.89% return has outpaced International by 7.85% annualized as the U.S. faced significantly less headwinds than Europe, Japan and Emerging Markets all did at various times.”

What’s Next for Investors?

While plenty of market observers are making the argument that emerging markets stocks are cheap and that the same is true of some major ex-US developed markets, including Europe and Japan, many investors have been willing to pay up for U.S. equity exposure.

“When it comes to investor positioning, rolling 3-month flows have ranged from over $48.3 billion in favor of International ETFs to $22.9 billion in favor of U.S. ETFs highlighting investors shifting preferences in the face of conflicting macro headlines,” according to Direxion. “The spread has been $39.9 billion over the last four months, still relatively large, but modest compared to the $71.3 billion for the full twelve months as many big picture issues impact the U.S. and non-U.S. to similar degrees, such as the ongoing China-U.S. trade talks.”