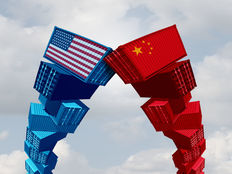 Top brass from major corporations across the nation agree that heading into 2020, trade war concerns remain at the top of their minds. If a trade deal isn’t reached by the proposed Dec. 15 deadline for a “phase one” deal, it could remain an enduring theme that will move the markets.

Per a CNBC report, the “Business Roundtable’s index of the CEOs’ outlook fell 2.5 points to 76.7 in the fourth quarter, which remains below the historical average and indicates moderation in the pace of economic growth in the next six months.” Furthermore, the outlook for GDP is at 2.1%, which falls in line with the Federal Reserve’s estimate of 2%.

All in all, the sentiment errs on the side of caution.

“CEOs are justified in their caution about the state of the U.S. economy,” Business Roundtable President Joshua Bolten said in a statement. “While we have achieved a competitive tax environment, uncertainty surrounding trade policy and slowing global growth are creating headwinds for business. Lawmakers should expand, not restrict, trade to help boost U.S. economic potential.”

Trade wars, in particular, could have adverse effects on the economy based on one CEO’s assertions.

All this creates an opportunity for investors to capitalize on the Direxion FTSE Russell US Over International ETF (RWUI). RWUI offers investors the ability to benefit not only from domestic U.S. markets potentially performing well but from their outperformance compared to international markets.