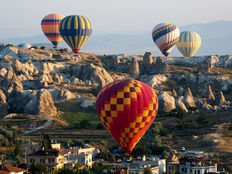 Leading the charge on Friday, Turkey’s main index of bank stocks surged over 6% on bullish positioning from some foreign buyers, Reuters reports.

A bank analyst told Reuters that two funds bought large positions in the Turkish financial sector but did not identify them, adding that the decline interest rates contributed to the optimism.

Turkey’s lira currency also strengthened on signs that the central bank front-loaded interest rate cuts and that tensions with Washington were easing, Reuters reports. Ankara encouraged state banks to lower rates to fuel lending and return the economy to positive growth after the economy weakened annually in the past three quarters.

“We chose to use a significant part of the room to manoeuvre in monetary policy in July and September in a front-loaded way,” Murat Uysal, Governor at Central Bank of Rep of Turkey, addressing an industry forum in Ankara, said. “When we made this decision, we targeted a monetary policy stance that would be largely in line with the targeted disinflation path. We evaluate that the current monetary policy stance is supporting the fall in inflation.”

Turkey’s banking sector has been a major concern after last year’s currency crisis erased about 30% of the value of the lira. Meanwhile, lenders were left with tens of billions of dollars of bad loans after accounting for the cost of servicing foreign currency-denominated debt with a depressed lira.

The iShares MSCI Turkey ETF includes a hefty 28% sector tilt toward the financial sector, with names like Turkiye Garanti Bankasi 9.4%, Akbank 9.2% and Turkiye Is Bankasi 3.4% of the ETF’s top holdings. Koc Holding, an industrial component, made up 5.7% of TUR’s underlying holding.