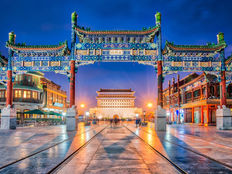 U.S. Secretary of State Mike Pompeo said Monday that it is “completely inappropriate” for China to fight back against U.S. businesses whose employees have criticized pro-democracy protests in Hong Kong.

“But what we’ve seen over the last few weeks publicly, but we’ve known now for an awfully long time, is that the long arm of Beijing is reaching out into these companies, stealing their intellectual property, forcing technology transfer, making it very difficult to, in fact, make a profit in China for many, many companies,” Pompeo said.

American businesses from Apple to Vans are increasingly under pressure when it comes to doing business in China. The Hong Kong protests are the latest hot button in a mercurial relationship with Beijing.

Recently a professional video game player from Hong Kong, named Ng Wai Chung, also known as “Blitzchung,” was banned from an elite global tournament after shouting comments in support of anti-government protests in the city. It’s just the most recent episode where a popular sport has been involved in tensions over the months-long political unrest.

“It’s a pretty complicated political and business issue. The NBA has a long-standing relationship with China. China loves basketball. They love the NBA. So put faith in Adam [Silver]who has done an amazing job as Commissioner,” said Andy Miller, NBA Sacramento Kings co-owner and owner of eSports team, The San Francisco Shock on CNBC.

Ng shouted the popular protest slogan “Liberate Hong Kong, revolution of our times” in Mandarin before the stream cut away to the two presenters. While this type of activity is supported by the U.S. Constitution, it is often frowned upon in other nations.

“We are all for freedom of speech especially in video games, which are very different animal than traditional sports in that it’s pretty boundary list. With new leagues like the Overwatch League we are in, there is sort of a local component, and then in other games, it’s more of an international, everybody is a fan of their favorite teams and players. So that’s just a real political issue, and we definitely back freedom of speech,” Miller added.

A single tweet in early October from Houston Rockets General Manager Daryl Morey, which said “Fight for Freedom. Stand for Hong Kong”, also generated a retaliatory response from China, a major market for the NBA. The basketball league’s initial response provoked criticism that the U.S. company was failing to stand for American values, but this stance was later adjusted.

Pompeo claimed that “from a foreign policy perspective, we think it’s completely inappropriate for China to attack U.S. businesses whose employees or customers exercise their fundamental freedoms here in the United States.”

He added: “We just think that makes no sense. And we’d encourage every company to make — take a good, close look ensuring that the kinds of things, the reciprocity that President [Donald] Trump has been demanding from China, actually takes place.”