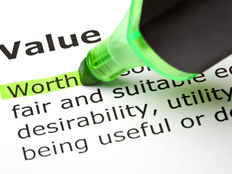 Value ETFs Are Starting to Take the Lead

The value style may be back in vogue, and investors can gain exposure to this segment of the market through targeted exchange traded funds.

Money managers and individual investors shifted over to shares of banks, manufacturers and other value stocks, which are often defined as companies whose shares trade at a low multiple to their book value or net worth, the Wall Street Journal reports.

The renewed interest for value has helped S&P 500 Value index rise 11% over the past three months, or more than double that of its growth counterpart. The recent outperformance has also helped lift the value index ahead of the S&P 500 Growth index for the year, and put it on pace for its strongest yearly performance since 2013.

A growing number of market observers argued that the rebound, which began in September, could potentially put an end to a decade-long stretch of underperformance after the growth style outshined in the prolonged stock market rally – the S&P 500 value index generated a 142% return over the past 10 years, compared to the 230% return for large growth companies, while the blended S&P 500 gained 185% over the period.

Proponents believed this time may be different for value stocks, pointing to improving measures of investment sentiment, abating fears of a recession, rebounding corporate profits and lessening trade tensions between the U.S. and China.

Furthermore, value stocks are now trading at some of their most attractive prices in years. Brian Belski, chief investment strategist at BMO Capital Markets, calculated that the valuation gap between value and growth stocks touched an extreme level in mid-2018 and has since grown even wider. Analysts at Bank of America also showed that value stocks were trading at one of their cheapest levels relative to momentum stocks since the 2003 through 2008 period.