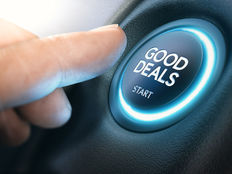 Value ETFs Are Way Too Cheap to Pass Up

Value stock exchange traded funds that track stable fundamentals and subpar valuations have not been this cheap relative to the broader markets in years.

According to Bank of America, value stocks are now trading at their cheapest since the financial crisis, CNBC reports.

“Value has never been this cheap vs. Momentum,” Savita Subramanian, head of U.S. equity and quantitative strategy at Bank of America Merrill Lynch, said in a note. “Many signals indicate that the recent rotation into Value/out of Momentum could continue.”

Investors have taken a keen interest in cheaper stocks since September after a decade of underperformance as more placed bets on economically sensitive, underpriced companies in hopes that a U.S.-China trade deal will come through. Bank of America underscored value names as being particularly inexpensive relative to momentum stocks.

“Some recent signs of stabilization in macro data also supports that the downturn might be bottoming and the Value rotation could continue,” Subramanian added.

Bank of America pointed out that the only time in history when value stocks have gotten this cheap was in 2003 and 2008, and the group outperformed momentum stocks by 22 and 69 percentage points, respectively, over the following 12 month period.

The iShares MSCI USA Value Factor ETF (VLUE B+) is one popular way for investors to track the value style. VLUE follows the performance of U.S. large- and mid-capitalization stocks with value characteristics and relatively lower valuations. Value stocks usually trade at lower prices relative to fundamental measures of value, like earnings and the book value of assets. On the other hand, growth-oriented stocks tend to run at higher valuations since investors expect the rapid growth in those company measures, but more are growing wary of high valuations.