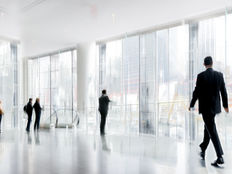 The Labor Department revealed that 164,000 jobs were added during the month of July while the unemployment rate was static at 3.7 percent. This represents a drop of a drop of about 61,000 or about 27 percent from June–will this hurt U.S. equities moving forward?

Data also showed that wages continue to climb, with a 3.2% year-over-year gain that bested expectations by one-tenth of a percentage point. Average weekly hours moved lower to 34.3.

For the markets hoping that future rate cuts could be on the way, Federal Reserve Chairman Jerome Powell dashed their hopes by saying it wasn’t the trend, but merely a “mid-cycle adjustment.”

“That refers back to other times when the FOMC has cut rates in the middle of a cycle and I’m contrasting it there with the beginning of a lengthy cutting cycle. That is not what we’re seeing now, that’s not our perspective now,” Powell said. “You have to look at not just the 25 basis-point cut, but look at the committee’s actions over the year.”

“We started off [the year] expecting some rate increases. We then moved to a patient setting for a few months and now we’ve moved here,” Powell added. “As we’ve moved to more accommodative policy, the economy has actually performed as expected with that gradual increase in support.”

The news of the rate cut comes after the U.S. economy added 170,000 nonfarm payrolls and the unemployment rate currently stands at a low 3.7 percent. The Commerce Department recently reported that Gross domestic product (GDP) fell during the second quarter to 2.1 percent, but still bested Wall Street analysts who were expecting a larger decline. GDP fell from 3.1 percent in the first quarter, which represents the weakest increase since the first quarter of 2017.

The central bank cited “implications of global developments for the economic outlook as well as muted inflation pressures.” The Fed also said it would “act as appropriate to sustain the expansion,” which meant that future rate cuts could take place.