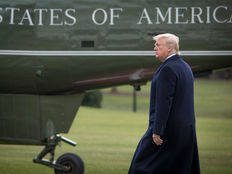 With the constant back-and-forth of markets this year due to fluctuating news headlines, a protracted trade war, rampant presidential tweeting, and the prospect of further rate cuts by the Fed, investors are speculating as to whether we are due for a recession or not, as this bull market continues to run long. But one economist sees the president as a key factor in the market’s success.

“This inverted yield curve scare looked frightening at first, but nothing dramatic has happened. So I think maybe were still in the Trump era. And I think that Donald Trump has by inspiration had an effect on the market, not just tax cutting. The bigger uncertainty of course is these impeachment hearings, and if he survives that he might contribute for some time in boosting the market,” said Yale economist Robert Shiller on CNBC.

This view stands in stark contrast to the Duke University professor Campbell Harvey who pioneered the inverted yield curve, which has been a reliable recession indicator in the past. Harvey is advising investors to take preventative action now rather than wait for a recession to be in full swing.

“This is the time where you need to reflect upon your strategy. It’s actually easy to manage assets when the economy is booming. It’s much more difficult to manage into a turning point,” said Harvey. “It’s way better to have a plan to go by than to find yourself in a situation where the recession hits and you have to improvise.”

Despite his bullish view, Schiller does admit that there is a lot of unpredictability right now however.

“It’s in incredibly uncertain time right now. We haven’t seen such uncertainty in a long time,and where is polarizing society as much as it is now,” he added.

The Yale economist notes that consumer spending is also a significant factor in the market’s resilience in the face of such uncertainty.

“Well the thing that interesting his consumption expenditures. So consumption as a fraction of GDP it hasn’t gone down much from the recession. So consumers are hanging in there. You might wonder why that might be at this time, so late into the cycle. It’s the longest expansion ever. You can say
the expansion was partly due to a Obama, but lingering on this long need an exclamation. And I think that has to do with The inspiration for many people provided by our motivational speaker president,” Schiller added.