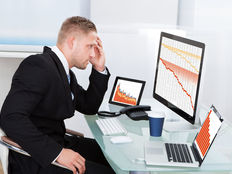 It’s a melting point of tension and concern in the markets, from geopolitical risks to looming interest rate increases as equities fluctuate more on investor sentiment and less on fundamentals. Strategists on Wall Street anticipate economic and earnings impacts from rising oil prices, interest rate increases, lingering and broadening inflation, as well as the potential for a war between Russia and Ukraine, writes Mark Hackett, chief of investment research at Nationwide, in a recent blog.

Earnings season this quarter has been the weakest one experienced since 2014, and while it’s not quite over yet, the ratio of companies above compared to below consensus guidance remains weak. Corporate sentiment is down too, at its lowest since mid-2020 when the onset of the COVID-19 pandemic caused economic shutdowns across the globe.

“Two prominent economists from opposite sides of the political spectrum, former Fed Governor Lawrence Lindsey and ex-Treasury Secretary Lawrence Summers, warned that the odds of a recession in the near term are over 50%,” Hackett writes.

A rapidly flattening yield curve driven by concerns of Fed policy missteps has created the lowest level spread between the 2-year and 10-year Treasury since the beginning of the pandemic. St. Louis Fed President Bullard made remarks regarding a need for aggressive rate hikes, culminating in a 1% increase by July that led to the Fed Futures curve peaking at 93% odds for a 0.50% interest rate increase in March before falling back to 66% on Monday.

Within the span of two months, anticipations for interest rate increases have grown from three or four in December’s “dot plot” to the Fed Futures curve now anticipating seven or more rate increases this year. This comes at a time when the CPI shows inflation that is not only continuing to run hot but also becoming increasingly broad as it spreads from the more cyclical categories it was once contained in.

“Right now, investors are selling first and asking questions later. But reacting to overreaction is rarely a sound strategy. While risks created by Russia, Ukraine and China are top of mind for investors, history has shown that these types of geopolitical tensions end up being more worrisome than impactful,” Hackett writes regarding the rapid escalation between Russia and Ukraine.

Investing in volatile markets driven heavily by negative sentiments can be difficult for advisors. Nationwide a line of actively managed ETFs for advisors that cater to a range of investment exposures and strategies for those seeking retirement income options for their clients in the midst of changing market conditions.