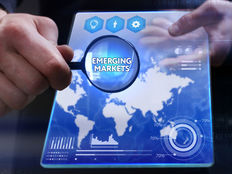 Under normal circumstances, at least 80% of the fund’s total assets will be invested in the component securities of the index and investments that have economic characteristics that are substantially identical to the economic characteristics of such component securities. The index is designed to create a more diversified equity portfolio of the common and preferred stock of companies in emerging markets relative to traditional market capitalization-weighted benchmarks.

“The news just gets worse for some emerging markets, with the collapse in oil prices adding further pressure to currencies and the fiscal situation of countries like Mexico, Brazil, and Russia,” reports Reshema Kapadia for Barron’s. “Of the commodity-producing emerging market countries, the one that is worrying analysts the most is Mexico.”

Fortunately for investors considering the Nationwide ETF, MXDE allocates just about 14% of its weight to Russia and commodities-heavy Latin America and the energy sector accounts for just over 3% of the fund’s roster.

Another MXDE benefit is that its reduced dependence on commodities producers keeps investors away from hefty exposure to countries with flimsy fiscal positions.

“The need for fiscal stimulus significantly strained government balance sheets, leading to what Bank of America global economist Aditya Bhave described in a note to clients as ‘unthinkable’ widening in fiscal deficits,” according to Barron’s.

MXDE’s lack of energy exposure is crucial in the current environment.

“Emerging market currencies have fallen around 20% in some cases—typically an inflationary development. But low demand and the sharp drop in oil prices are disinflationary, giving emerging market central bankers room to cut rates to record lows,” according to Barron’s.

MXDE, which recently turned two years old, employs a unique methodology relative to cap-weighted funds in this category. The fund’s index, TOBAM, applies liquidity, and socially responsible investment (SRI) screens in determining the investable universe. Based on a patented, proprietary mathematical formula, the TOBAM Diversification Ratio, TOBAM weights individual stocks to minimize the correlations among holdings, resulting in the creation of the “most diversified portfolio,” given a 50% active share constraint.