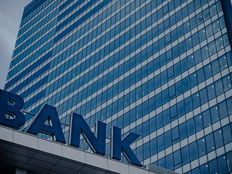 Banks Have It Rough, but Some ETFs Offer Safe Dividends

With the Federal Reserve having pared interest rates to near zero, concerns are mounting about banks’ net interest margins and whether those depressed margins could affect shareholder rewards, including buybacks and dividends.

Some bank ETFs, including the Invesco KBW Bank ETF (KBWB B), are homes to high concentrations of companies with safe dividends. KBWB tracks the widely followed KBW Nasdaq Bank Index.

Bankers typically make their money off the difference between long-term loans and deposits, underscoring investors’ apprehension about the industry right now.

“Fortunately, bank dividends today are generally safer than they were during the financial crisis, analysts at Keefe, Bruyette & Woods said in a note earlier this week,” reports Carleton English for Barron’s. “While market gyrations have given many investors flashbacks to the financial crisis, banks aren’t in the same precarious position they were 12 years ago. Lending standards have tightened up, banks are better capitalized, and years of stress testing have forced banks to prove their durability in scenarios such as the one we’re seeing now.”

Home to nearly $317 million in assets under management, KBWB has a trailing 12-month yield of about 4%. That’s above-average but not high enough to be a cause for alarm.

“Some investors are staying the course, hoping bank dividends stay intact, as they provide a more attractive yield than Treasuries now that the yield on the 10-year note is hovering near record lows. With capital levels higher than pre-crisis levels, KBW says dividends have a strong line of defense,” according to Barron’s.

Wells Fargo (WFC) and Citigroup (C), which combine for 14.50% of KBWB’s weight, have two of the safest dividends among large money center banks.

Large regional banks, such as KeyCorp (KEY), Huntington Bancshares Inc. (HBAN) and Citizens Financial Group (CFG), are also seen as having sturdy payouts. That trio of stocks combines for almost 10% of KBWB’s roster.