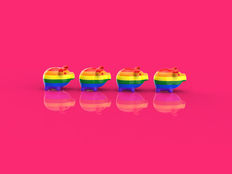 Despite the progress the LGBTQ+ community has made over the past decade in terms of legal protections, members of the community still lack equality when it comes to financial security. A recent survey conducted by the Nationwide Retirement Institute showed that while 54% of the general U.S. population were optimistic about their personal financial situation, only 41% of LGBTQ+ Americans had a positive view of their current finances. Nearly one quarter (24%) of LGBTQ+ Americans viewed their personal financial situation as poor.

Rona Guymon, senior vice president of annuity distribution for Nationwide Annuities, wrote in a blog post that members of the LGBTQ+ community were more likely to say they don’t have control of their day-to-day finances. Additionally, fewer LGBTQ+ Americans said they could absorb a surprise expense of $1,000, were on track for their financial goals, or felt secure about their financial future.

While retirement planning is a top goal for everyone, fewer LGBTQ+ individuals give it high priority due to the unique financial challenges and competing financial priorities of the community. Saving for experiences and paying off debt rank higher as financial goals.

One of these unique challenges that LGBTQ+ Americans face that impact their financial priorities is workplace discrimination. Both gay men and lesbian women report earning less than their heterosexual peers. Lower earnings mean less long-term savings, which widens the financial preparedness gap between LGBTQ+ Americans and the overall population.

In addition, a majority of LGBTQ+ Americans believe that most financial professionals don’t understand the impact these financial challenges have on their lives. Seven out of 10 LGBTQ+ Americans would feel more comfortable with a financial advisor who is a member of the LGBTQ+ community or a vocal ally.

This presents an opportunity for financial professionals to help LGBTQ+ clients focus on their financial futures. Advisors should take the time to listen to their clients about their unique financial challenges and learn how these issues affect their overall financial picture.