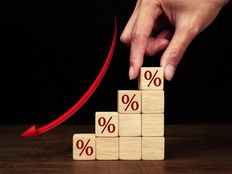 Recession concern is on the rise after the most recent Federal Reserve interest rate hike of 75 basis points (0.75%) at the July Federal Open Market Committee meeting. With a month break until the next FOMC meeting in September, economic slowdown already flagging in several indicators, and a second quarter of GDP contraction, worry is mounting that the economy is headed towards or might already be experiencing a recession.

“Investors and economists have been grappling with the notion that the Federal Reserve may cause a recession or, worse, a protracted recession through a policy error (i.e., hiking rates too aggressively),” wrote Mark Hackett, chief of investment research for Nationwide’s Investment Management Group, in a recent blog post.

The issue around interest rate hikes lies primarily around their timing — both the Fed’s late response to raising rates as well as the rapidity of this rate hiking cycle. If done too aggressively, it could land the economy squarely in a recession. The Fed has acknowledged that recession is “certainly a possibility,” according to Federal Reserve Chair Jerome Powell, but the central bank remains laser focused on bringing inflation under control, even at the cost to the U.S. economy.

Hackett likens gauging the impacts of monetary policy to Nobel economics laureate Milton Freidman’s “fool in the shower” idea. It’s akin to getting in a shower that is too cold, adding hot water to make the water warmer, and then in the delay of waiting for the water to adjust, turning it even hotter, ultimately ending with a shower that is scalding hot.

“Friedman stated that monetary policy operates with long and variable lags, and any change in monetary policy should be done slowly to gauge the effect on the economy,” Hackett explained.

The aggressive monetary policy that the Fed has embarked on, with four consecutive months of interest rate hikes that have a current rate range of 2.25%–2.5%, has been in direct response to persistent high inflation. Meanwhile, GDP contracted for the second consecutive quarter, and other indicators are beginning to reflect economic slowdown as well.

“It’s important to note the Fed may be raising rates while the U.S. economy is already in a recession. This uncertainty or ‘recessionary fog’ may cause investors to wonder if an upcoming recession will be imminent, shallow, protracted, or something entirely different,” Hackett mused.