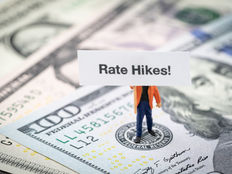 This year, the fixed income market isn’t lacking for headline risk. There was the surge in 10-year Treasury yields earlier this year, lingering fears about inflation, and the persistent vs. transitory debate, along with ample tapering talk.

The other wild card that was recently introduced into that already-turbulent scenario is the specter of the Federal Reserve potentially raising interest rates sooner than expected. Entering this year, conventional wisdom held that the Fed was perhaps two or three years away from a single rate increase, but that outlook is changing as the U.S. economy rebounds from the coronavirus slump.

“Some Federal Reserve officials expect the economy to reach full employment by the end of next year, which would set the stage for the first increase in the target range for the fed funds rate soon thereafter,” says Moody’s Investors Service. “Our baseline forecast has the first rate hike occurring in the first quarter of 2023, consistent with market expectation.”

As the research firm notes, with a 2023 rate hike looking increasingly likely, market participants are now looking to shift their attention away from when rates will rise to the intensity of the upcoming tightening regime.

For those fearing higher borrowing costs, there’s still a possible silver lining because the Fed is likely to be gradual in its approach to higher rates.

“Financial markets expect this tightening cycle to be gradual, pricing in about 125 basis points of tightening by the end of 2028,” adds Moody’s. “It is difficult to see how the central bank could normalize rates in 2023 and subsequent years as slowly as the markets are pricing in with the economy expected to be at full employment and inflation firmly above its 2% through-the-business cycle target.”

The above plays into the aforementioned, ongoing persistent vs. transitory inflation debate. If the above sentiment proves accurate, it would likely imply inflation expectations have to move higher and that’s not something the Fed can gloss over. Even if that’s the case, the “new-look” benchmark isn’t likely to be alarming, and it’s going to take some time to get there.

“Of course, there is a lot of script to be written between now and then. We, like policymakers, expect the federal funds rate to eventually settle near 2.5%, but it will take until mid-decade to get there. On the other hand, financial markets believe the fed funds rate would be only 1.5% by the end of the decade,” concludes Moody’s.