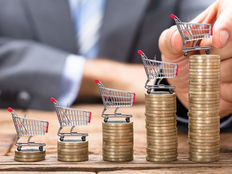 Here's What Americans Think About Inflation

More than eight months into 2021, some inflationary trends are now more than obvious. First and foremost, the Consumer Price Index (CPI) is on a multi-month streak of increases.

Secondly, the persistent vs. transitory debate rages on. However, what’s not debatable is that inflation is a problem for retirees. Not surprisingly, Americans’ views on rising prices aren’t positive, and that’s unlikely to change anytime soon.

“Most Americans who have tried to purchase a major good (cars, appliances, furniture, etc.) have experienced difficulties making the purchase due to lack of availability,” according to a Global X survey of 567 consumers.

Historically, inflation has been viewed as an economic condition that’s particularly punitive for retirees because they’re out of the work force, and rising prices erode the value of their investment income. That remains the case today, but inflation is age agnostic, meaning that it affects a variety of demographics, and younger consumers are none too happy about it.

Persistent or transitory, inflation is problematic, and that’s being exacerbated by the coronavirus pandemic as some price increases are resulting from crimped supply chains. That’s causing fallouts throughout the broader economy.

“Most Americans have experienced longer wait times and/or higher than expected prices as they have tried to purchase services that were constrained by COVID (dining at restaurants, air travel, hotels, rental cars, etc.),” notes Global X. “More Americans have had difficulties purchasing COVID constrained services than purchasing major goods (three out of four vs. two out of three).”

Getting back to inflation’s impact on retirees, it’s particularly rough this year because bond yields may not deliver income against an inflationary backdrop. Stocks are the primary avenue for contending with that situation, but many retirees may be looking to reduce equity market risk in their portfolios.

“Older cohorts of Americans have experienced larger increases in normal recurring monthly expenses over the past six months than younger cohorts,” says Global X. “Most Americans expect a larger than normal increase in prices over the next six months.”