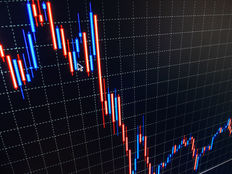 Just when it seemed as though stocks were defying seasonal precedent — August through October is usually a rough period for equities — the S&P 500 fell off almost 3% over the past week.

There is an array of concerns that investors are pondering today, including tapering by the Federal Reserve, still-hot inflation, the fate of the debt ceiling debate, and efforts by congressional Democrats to push through a $3.5 trillion spending package. Add all that up along with some high valuations, and it’s a recipe for a pullback.

“Equity markets are looking to avoid their first three-week losing streak in a year, as the tone of trading has turned notably risk-off. The S&P 500® Index has declined in eight of the past 10 sessions (entering Sept. 20) and has brought the Index below the 50-day moving average for just the second time this year. Despite the weakness, the S&P 500 begins the week just 2.3% below the record high and has returned 19% for the year,” says Nationwide’s Mark Hackett.

As Hackett notes, the recent weakness in stocks isn’t yet stoking a flight to high-quality bonds. That’s an important point to consider because it could indicate that investors are wagering that a pullback in equities will be brief and are willing to wait it out with stocks rather than flock to low-yield Treasuries.

On the other hand, the buy the dip approach that served investors so well for so long is waning, and some major banks are highlighting that problem.

“The headwinds facing the market remain unchanged, but the buy-the-dip approach by investors that drove 54 record closes for the S&P 500 has faded. This is echoed by a decidedly bearish shift from Wall Street strategists, including Bank of America, Morgan Stanley and Citi,” according to Hackett.

If buy the dip continues to falter, sentiment could shift for the worse, and it seems that this is starting to happen.

“Investor sentiment and behavior have again diverged, with the AAII sentiment survey showing the largest weekly decline in bulls in over two years, with the largest inflow into equity funds ($51 billion) in six months,” notes Hackett.

Of course, investors can be fickle, and if headline risk ebbs and bond yields remain low, investors could be compelled to get back into stocks. They may not have much choice.