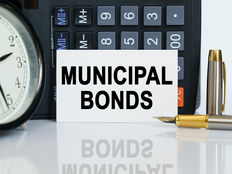 As Tax Talks Ramp Up, Investors Turn to Municipal Bonds

The Biden Administration is proposing significant increases to capital gains taxes, and while those levies are aimed at big earners and the wealthy, the debate is bringing renewed attention to tax-advantaged asset classes.

That group includes municipal bonds. While some municipal bonds are taxable, the bulk of the debt issued by states, cities, and counties come with tax breaks. Not only is the new tax debate stirring talk of investments with tax perks, some market observers believe it will continue to boost assets like the VanEck Vectors High Yield Muni ETF (HYD A-) and the VanEck Vectors Short High Yield Muni ETF (SHYD C+).

Municipal bonds in junk territory usually aren’t as risky as high-yield corporate counterparts and the muni space has seen limited defaults in recent years, adding to the allure of funds like HYD and SHYD. Bolstering the case for the VanEck funds is that, in today’s low-yield environment, investors want high-yield munis, but supply isn’t particularly abundant.

“For the past two to three years, demand for municipal bonds has been increasing. Moreover, certain legislation passed to limit issuance of some types of bonds as well as a generally conservative approach by states and cities to hold down spending have led to insufficient bonds being issued to meet demand,” says VanEck portfolio manager Jim Colby. “Even as demand has grown in high yield, according to fund flow data from Morningstar, MSRB new issuance supply has not been strong enough to prevent spreads from narrowing.”

Enhancing the case for municipal bonds is the American Rescue Plan. That recently passed legislation is helping states shore up their fiscal houses as needed.

While the bill doesn’t allow states to plug gaps in public pensions, previously a source of consternation for the municipal bond market, it is providing cash for other purposes. That liquidity is reassuring some muni market participants.

In the case of SHYD, an effective duration of 4.24 years is a plus if Treasury yields continue to rise. The ETF boasts $322 million under its belt.

“SHYD seeks to provide a certain degree of protection against interest rate moves with a lower duration profile than HYD—generally from 1.25 years to 3 years. Its average credit quality, by design, is slightly higher, historically offering a higher liquidity profile,” adds Colby.