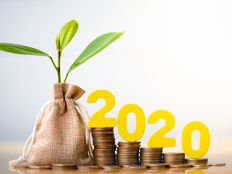 The tech-heavy Nasdaq-100 Index appears to be ready for a big breakout and that could increase the allure of the Nationwide Risk-Managed Income ETF (NUSI).

NUSI is an actively managed portfolio of stocks included in the Nasdaq-100 Index and an options collar. Per index rules, the fund only invests in the top 100 largest by market cap, nonfinancial stocks listed on NASDAQ. A collar strategy involves selling or writing call options and buying put options, thus generating income to hedge some downside risk. The strategy seeks to generate high current income monthly from any dividends received from the underlying stock and the option premiums retained.

“Up an average of 0.6% a day since bottoming in March, the Nasdaq 100 would need to rise twice that to jump above the record it set before the pandemic selloff began. More than forty of its members are already higher than their level on Feb. 19, including 10 that have managed to surge at least 20%,” according to Bloomberg.

“Flush with cash and safe from insolvency, built for a stay-at-home world and streamlined with algorithms and automation, companies including Microsoft Corp. and Amazon.com Inc. have hauled the Nasdaq 100 up 37% since the March bottom,” according to Bloomberg.

Those are two of the largest components in the Nasdaq 100.

“Microsoft, whose shares have gained 16% in 2020, has seen demand for its web-based software and cloud services surge from people working from home. On an adjusted basis, the technology giant will earn more in the current quarter than it did in the same period a year ago, according to the average of analyst estimates,” reports Bloomberg.

NUSI can act as a complement to traditional equity and fixed income allocations or as the ideal protective hedge for investors with heavy exposure to technology and growth stocks because the fund is a “rules-based options trading strategy that seeks to produce high income using the Nasdaq-100 Index,” according to Nationwide.

Covered call strategies can potentially augment a portfolio during periods of heightened volatility. The covered-call options allow an investor to hold a long position in an asset while simultaneously writing, or selling, call options on the same asset.