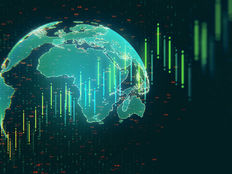 This May be the Way to Revisit International Stocks

As has been widely documented, international equities are floundering again this year relative to their U.S. rivals, but there are some areas of potential strength, including the WisdomTree International Hedged Quality Dividend Growth Fund (IHDG B+).

IHDG targets dividend growers in developed markets, excluding the U.S. and Canada and features a currency hedge that can protect investors in the event the dollar rebounds around developed market currencies. IHDG, which carries an annual expense ratio of 0.58%, tracks the WisdomTree International Hedged Dividend Growth Index (WTIDGH).

With the dollar residing at its highest levels in about a month, IHDG takes on increased importance. In fact, dollar durability is bolstering the case for the fund this year as IHDG’s 2020 loss is about half that of the MSCI EAFE Index.

IHDG’s underlying index “currently has a ROE that is 40% greater than the S&P 500, profit margins 3.5% higher than the S&P 500 and a leverage ratio that is one-third that of the MSCI EAFE Index and almost half that of the S&P 500,” said WisdomTree Director of Research Jeremy Schwartz in a recent note. “For these better profitability and growth metrics, you are also not paying a premium multiple to the S&P 500 but getting the market at around a one-point discount instead.”

IHDG’s holdings are weighted by cash dividends paid, a strategy that can prove useful for investors looking to evaluate the consistency and sustainability of a company’s payouts. Since coming to the market just over three years ago, IHDG has topped more traditional ex-US developed market strategies while being slightly less volatile.

“While the characteristics of broad international benchmarks are understandably ‘less expensive for good reasons,’ we believe this basket of international quality stocks looks attractively priced versus the S&P 500 for its improvement in quality and growth characteristics,” adds Schwartz.

The $636.38 million IHDG holds over 200 stocks, about 43% of which are Japanese and U.K. issues. The healthcare, consumer staples, technology, and consumer discretionary sectors combine for nearly two-thirds of the fund’s weight.