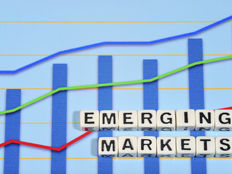 Turning Back To Emerging Markets With This ETF

The MSCI Emerging Markets Index is higher by 5% over the past month and recent strength in developing world equities could prompt investors to revisit the asset class. The Maximum Diversification Emerging Markets Core Equity ETF (MXDE) is a prudent avenue for doing that.

Under normal circumstances, at least 80% of the fund’s total assets will be invested in the component securities of the index and investments that have economic characteristics that are substantially identical to the economic characteristics of such component securities. The index is designed to create a more diversified equity portfolio of the common and preferred stock of companies in emerging markets relative to traditional market capitalization-weighted benchmarks.

“China’s economy probably returned to growth in the second quarter, putting the yuan — the current barometer of global risk sentiment — on course for further gains following its biggest weekly jump since January 2019. Goldman Sachs Group Inc. revised its 12-month forecast of the currency to 6.7 from 7, expecting it to benefit from a weaker dollar,” reports Bloomberg.

The MSCI Emerging Markets Index is on the move higher with China and Russia leading the way as the world looks to recover from the coronavirus pandemic. After falling below 760 back in March during the sell-offs, the index is now back above 1,000.

Emerging markets have always given investors another look at the global growth landscape, particularly since they could be in different economic phases—for example, the U.S. could be reaching a peak while an emerging market country could be in a growth acceleration phase.

MXDE’s methodology helps investors avoid some of the trouble spots in the developing world, including economies hindered by massive debt burdens. Resilience in Chinese markets bolsters the case for EM assets, including MXDE.

“That’s likely to add further momentum to this month’s rally in emerging-market currencies, with the 50-day moving average on an MSCI Inc. gauge now higher than its 100-day counterpart. Developing-nation currencies are cheap and will probably play catch-up with other risky assets as the foreign share of local debt holdings has shrunk to a record low, according to Deutsche Bank AG,” according to Bloomberg.

Year-to-date, MXDE is beating the MSCI Emerging Markets Index by about 240 basis points.