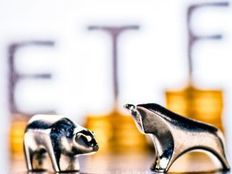 ETF Database caught up with Dave Stack, Vice President in ETF Capital Markets Group at DWS, to discuss the ETF ecosystem, high yield and ESG given the recent market volatility.

David, there’s been a lot of scrutiny of the ETF ecosystem over the course of the last several weeks. Can you provide some general thoughts on how it has stood up, and then perhaps cover in particular what you have seen in bid/offer spreads, volumes, and this issue of price-to-NAV discounts, particularly for fixed income ETFs?

I would say that, once again, the ETF structure has withstood another crisis well. We’re close to the point now where critics can no longer cite the already dubious assertion that ETFs have not been around for long enough to test their structure in volatile times. In fact, they have weathered a number of crises, and this time we have found what we have pointed out, and seen, before, that, in reality, ETF volume goes up during a sell-off – so they end up attracting liquidity into the structure, not having liquidity flee from them, at precisely the needed moment.

The recent period of volatility did provide some interesting pricing dynamics that we have not experienced since the global financial crisis, such as bid ask spread widening on treasuries and almost every other asset class. Pricing dynamics remained strong for ETFs though we did see some spread widening across the ETF market place due to widening of bid ask spreads of underlying assets. you’re right to point out that there has indeed been a lot of focus on the discount to NAV issue, particularly for fixed income ETFs. Now, this is a bigger topic than I can reasonably go into here, but what I would simply say is this. It’s not the case that if an ETF has a price that is quite different to NAV that that is necessarily a problem. In fact what is likely happening, in my view, is that ETF markets were reacting to information, and reflecting price changes, more fluidly than Net Asset Values, which are often based on less traded prices. So, don’t make the mistake of believing that a discount to NAV necessarily indicates a problem with the structure. It certainly shows you that something is going on, and you should certainly try to figure out what that is, but it’s not indicative of a fault with the structure in my view.

So, are you saying that ETFs have, in a sense, become a better price discovery vehicle in some cases in recent days than the underlying assets? What are the implications of that in terms of the role they play in the market for less liquid asset classes?

I think in many cases you can say exactly that, and especially during times of stress. A lot of market participants who want to express a sizeable view on an asset class choose to do that through the ETF in the first instance. And they do it because they know that, oftentimes that will be where the most liquidity resides (liquidity here for their purpose being the ability to buy or sell the largest amount of the asset class with the least price impact). In terms of the implication of that, well, keep in mind two things. Firstly that this is an option that was not always available to them so is, in that sense, a good thing. And, secondly, that ETFs have two layers of liquidity, the primary market (where creates and redeems occur), and the secondary market where buyers and sellers of the funds meet on exchange. It’s hard for me to understand why anyone would think that an additional layer of liquidity – that you didn’t have prior to the invention of ETFs – would be a bad thing. After all, investors aren’t any worse off than they were before ETFs were around.

The Fed has announced that they are going to widen their buying remit to include corporate debt, both directly, and through ETFs. Tell us your views on what the means for the asset class, and for ETF investors?

Well, the Fed has announced a swathe of buying of course, across multiple asset classes. And that now appears to include asset classes and instruments that they hadn’t, or weren’t able, to buy before. In my view, this is an endorsement of the ETF structure for both portfolio diversification and as well as transparency. Purchases of the defined ETFs allow the FED the ability to own, both the broad market, and longer dated corporate bonds. Also ETF fund flows are reported on a T+1 basis, and this provides transparency on flows which in turn could provide a boost to investors’ confidence.

Are DWS seeing particular opportunities at the moment? Either to create strategic positions in oversold areas, or to harvest losses and switch into cheaper, or more interesting strategies?

Market sell-offs present opportunities for those that can keep their heads, and not panic. A lot of risky assets, and some less risky ones, are effectively now being offered at discounts to where they were just a month or so ago. So, it’s a good time to look out for opportunities. As always, let fundamentals and valuations be your North Star.

In terms of interesting strategies, it could make sense to lock in some losses to offset against later gains, and, as always, we’d suggest investors use this time to think about what are some sensible things to do as they return to asset classes that they have moved away from. Two examples that we have here at the firm would be (HYLB) which is the cheapest broad High Yield ETF offering in the US, and (SNPE), which is an ESG values-based version of the S&P 500 index. For advisors who weren’t able to switch into a strategy like that because of embedded gains in the vanilla market, this year may have provided just such an opportunity.