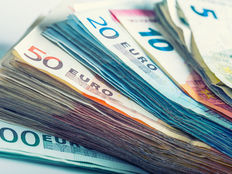 The latest rise in the euro is feeding into much-needed strength for emerging markets (EM) currencies, which is a positive sign given that EM assets typically correlate with the strength of their respective currencies.

Another factor contributing to euro strength is the weakening dollar. With interest rates at historic lows, the greenback has been seeing downward pressure despite its strong safe haven status amid the height of the pandemic sell-offs.

“Euro appreciation against the dollar is a widely followed symbol of generalized dollar weakness, which encourages investors to invest in assets that are denominated in other currencies,” said Kasper Bartholdy, a London-based strategist at Credit Suisse Group AG.

The euro could see more strength this week as more economic news floods in, particularly with regard to the latest stimulus bill to help boost the EU economy.

“Attention this coming week will likely center on the European Commission’s proposed €750 billion packages to help the EU economy recover from the damage caused by the Covid-19 pandemic,” a Daily FX report noted. ‘It is expected to be discussed Thursday at a meeting of the Eurogroup, the informal body where the ministers of the Eurozone member states talk about matters relating to their shared responsibilities for the Euro.”

That’s not to say, however, the path to more euro gains will be smooth sailing.

“The path to an agreement will be rocky,” the report added. “Last week, for example, Finland’s government said it would reject the proposal in its current form. Nonetheless, the Eurogroup will likely prepare the way for the plan to be discussed by the EU heads of state and government at a meeting of the European Council on June 19, paving the path for a deal later this summer, and that should keep the Euro heading higher.”

While investors can utilize a plethora of currency hedging techniques, one way to do so without overcomplicating the process is via currency-hedged exchange-traded funds (ETFs). One fund is that hedges against EM countries like Brazil is the Xtrackers MSCI Emerging Markets Hedged Equity ETF (DBEM A-).