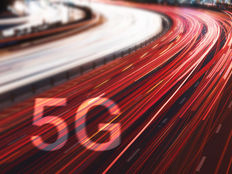 How to Invest for the 5G Revolution

By Eric Dutram, Contributor for DWS

The next big step in wireless communications is here. Major network providers across the U.S. have begun to deploy so-called 5G technology which represents the fifth generation of wireless connectivity. The main benefit from this new technology looks to be faster connections and more capacity for both devices and data.

As is often the case in the cell phone industry, the competitive nature of the business is driving the major players to jump on board this new technology in an effort to offer the best environment for their subscribers. However, the need for 5G technology isn’t just so that major communication conglomerates can stave off the competition or have a nice marketing win. There are very real concerns that make this 5G evolution necessary in some respects.

Mobile data growth is expected to soar over the next few years, suggesting that the increased capacity potential afforded by 5G could be crucial. In fact, American global smartphone data usage—in gigabytes (GB) per month— is expected to see compound annual growth of over 37% for the period from 2017-2023. This is by no means an America-only phenomenon though, as global smartphone data usage is expected to post similar growth rates as a variety of high usage applications take hold on cell phone networks across the world. 1

Mobile data needs from smartphones may just be the tip of the iceberg for the shift to 5G technology. The Internet of Things is expected to be a major driver of connectivity and could put further strain on networks as potentially millions of new devices require internet access.

The world of solely requiring devices such as smartphones or laptops to be online is gone. Consumers now demand connectivity anytime and anywhere, and capacity is being forced to keep up with this new reality. Increasingly, everything from airplanes to toasters are connecting to the internet, creating a sizable need for networks to meet the seemingly ever growing demand.

While tech firms or telecommunication giants may dominate the discussion of the 5G landscape, there are other options for investors seeking to take advantage of these trends. One potential way that may not be obvious at first glance, but could be in a great position to take advantage of the push to 5G and greater connectivity, are cell phone tower REITs.

Unlike relatively volatile tech firms or the cutthroat battle among telecoms, tower REITs can potentially offer a unique combination of stable cash flows and strong growth prospects. That is because they provide the infrastructure that is crucial for not only the deployment of 5G, but a variety of other connectivity programs in place as well. This includes the current benchmark of 4G, stand-alone towers, rooftop antennas, or in-building solutions.

Their diverse infrastructure and key locations allow cell tower REITs to extract relatively favorable contract terms from data providers who utilize the REITs’ networks and equipment to provide services to their customers. For example, leases are long-term—generally at least a decade—while there are often annual price escalators (approximately 3%-5%) which has kept revenues well ahead of inflation historically.

It is also worth noting that multiple carriers can use the same tower, a scenario that can create some economies of scale for the REIT, particularly in quality locations which attracts additional demand from carriers. Furthermore, due to the nature of 5G, which focuses on small millimeter waves, additional penetration and coverage is needed in order to provide high levels of connectivity, adding to the appeal of REITs that have a robust network that can deliver strong capabilities to clients.

In many ways, cell phone towers have been a critical part of the information revolution, acting as the backbone for smartphone and internet connectivity. And with structural changes and likely required infrastructure improvements for the next generation, these REITs could retain their important position into the future as well.

5G looks to be a crucial step for the telecommunication industry as the sector looks to keep up with growing data usage. However, this may not be possible without increased reliance on cell phone towers, many of which are owned by the country’s largest tower REITs.

These REITs could find themselves in an enviable position for investors thanks to their long-term contracts, annual price escalators, and key locations or infrastructure in many of the nation’s most important markets. The 5G revolution may very well hinge on this corner of the REIT world, and it is one that believers in growing data usage may not want to overlook for their portfolios going forward.