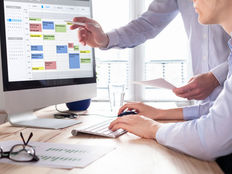 With a lot of uncertainty in the bond markets surrounding Covid-19, short duration gave investors some peace of mind with a lesser long-term commitment, but one particular fund got a lot of attention—the JPMorgan Ultra-Short Income ETF (JPST A).

Per a Bloomberg report, the fund “surpassed the long-reigning PIMCO Enhanced Short Maturity Active ETF, ticker MINT, as the largest active fund in the $4.9 trillion market. JPST has surged to $13.94 billion in assets after launching in May 2017, overtaking the $13.88 billion MINT, which debuted in November 2009.”

JPMorgan got into the ETF game in 2014 and relative to its competitors, they still don’t have a large market share, but they’ve been able to make a name for themselves in the actively managed fund space.

“JPMorgan was relatively late to crash the ETF party, but they have used their scale and strong brand to climb the leader board with both low-cost asset allocation based and actively managed fixed income ETF products,” said Todd Rosenbluth, head of ETF and mutual fund research at CFRA Research. “JPST has barely turned three years old and has become a go-to strategy for cash management.”

JPST seeks to provide current income while seeking to maintain a low volatility of principal. Under normal circumstances, the fund seeks to achieve its investment objective by investing at least 80% of its Assets in investment grade, U.S. dollar-denominated short-term fixed, variable, and floating rate debt.

“Assets” means net assets, plus the amount of borrowings for investment purposes. As part of its principal investment strategy, it may invest in corporate securities, asset-backed securities, mortgage-backed and mortgage-related securities, and high quality money market instruments such as commercial paper and certificates of deposit.

“JPST experienced a relatively shallow drawdown during the selloff earlier this year,” said Ben Johnson, Morningstar’s global director of ETF research. “To the extent that JPST did a relatively better job on that front than MINT in the worst market in recent memory, it could have influenced subsequent flows.”

Another short duration bond ETF to take a look at is the Xtrackers Short Duration High Yield Bond ETF (SHYL A-). The fund seeks investment results that correspond generally to the performance, before fees and expenses, of the Solactive USD High Yield Corporates Total Market 0-5 Year Index.

The fund will invest at least 80% of its total assets (but typically far more) in component securities of the underlying index. The underlying index is designed to track the performance of short-term publicly issued U.S. dollar-denominated below investment grade corporate debt.