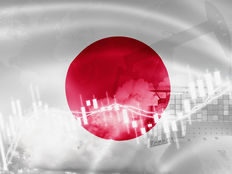 Keep An Eye on Japan ETFs as Q2 Economy Shrinks

Developing and emerging economies alike have felt the pangs of the Covid-19 effects. Even with a healthy injection of stimulus by certain countries, it’s been a difficult second quarter all across the globe.

A recent CNBC report noted that “Japan’s economy shrank 27.8% on an annualized basis in April-June, according to government data released Monday. That was the sharpest contraction on record, according to Reuters. The preliminary reading for Japan’s second-quarter gross domestic product compared against economists’ median estimate of a 27.2% decline, Reuters reported.”

″(Japan’s) second-quarter GDP reading was well expected,” Ken Wong, Asia equity portfolio specialist at Eastspring Investments, told CNBC’s “Street Signs” on Monday. He cited factors such as Japan being in lockdown for most of April and May.

“It is unfortunate but it’s one of those situations where, you know, I think most people had anticipated,” Wong said. “We are expecting to see a revival in third quarter GDP, to some extent, when you compare it on a quarter-on-quarter basis.”

Value-seeking investors could look to developing markets like Japan if they want to stay away from the heightened risk posed by investing in emerging markets. AS such, one fund to consider is the Xtrackers Japan JPX-Nikkei 400 Equity ETF (JPN B-), which seeks investment results that correspond generally to the performance, before fees and expenses, of the JPX-Nikkei 400 Net Total Return Index.

The index is designed to track the performance of equity securities of issuers who are primarily listed on the following sections of the Tokyo Stock Exchange (“TSE”): the 1st section, the 2nd section, Mothers or JASDAQ. The fund will invest at least 80% of its total assets in component securities of the underlying index.

Investors looking for exposure to Japan can look at exchange-traded funds (ETFs) like the Xtrackers MSCI Japan Hedged Equity ETF (DBJP A+). DBJP seeks investment results that correspond generally to the performance, of the MSCI Japan US Dollar Hedged Index.

The fund, using a “passive” or indexing investment approach, seeks investment results that correspond generally to the performance, of the underlying index, which is designed to track the performance of the Japanese equity market while mitigating exposure to fluctuations between the value of the U.S. dollar and the Japanese yen. It will invest at least 80% of its total assets in component securities (including depositary receipts in respect of such securities) of the underlying index.