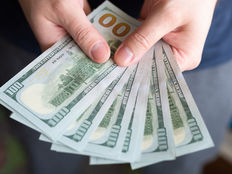 The U.S. dollar has been a steady performer during the turbulent times of the pandemic, serving as a safe haven for investors amid the uncertainty. However, as yields continue to head south, this could threaten the dollar’s status as a safe haven asset.

This could be the case should the U.S. follow other nations into negative rate territory.

“The dollar’s edge over the competition is that it is a tried and tested hedge in times of crisis,” a South China Morning Post article said. “It has a well-proven track record as a global medium of exchange with impeccable reserve asset status. Investors’ ability to get in and out of the dollar quickly and easily is beyond doubt.”

“What might be the game-changer in the coming months is the risk that the Fed, faced with a dramatic collapse in US growth, may be forced to give the green light for US interest rates to follow Europe and Japan into negative territory,” the article added.

In the meantime, investors looking to bet on further dollar strength can look to exchange-traded fund (ETF) exposure via funds like the WisdomTree Bloomberg U.S. Dollar Bullish Fund (USDU ). UUP tracks the price movement of the U.S. dollar against a basket of currencies, including the euro, Japanese yen, British pound, Canadian dollar, Swedish krona, and Swiss franc.

Another interesting all-world play that hedges against currency fluctuations against the U.S. dollar is the Xtrackers MSCI All World ex U.S. Hedged Equity ETF (DBAW A). DBAW seeks investment results that correspond generally to the performance, of the MSCI ACWI ex USA US Dollar Hedged Index.