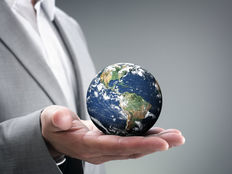 This ETF Puts the Whole World In Your Hands

Economic activity may have reached a trough and is ready to rise, according to global investment firm Goldman Sachs. A subsequent improvement in the global gross domestic product (GDP) will help feed into strength for the Vanguard Total World Stock Index Fund ETF Shares (VT A+)—a global exposure fund that essentially puts the whole world at the fingertips of ETF investors.

Goldman Sachs initially estimated that global GDP would see a 16% decline since January, but is also expecting that a subsequent V-shaped and U-shaped economic recovery will take place.

“We expect GDP to grow … as firms and households learn to combine higher economic activity with continued virus control via a range of adjustment mechanisms including mask and glove-wearing, frequent cleanings of workplaces, lower office and retail occupancy, and improved testing and contact tracing,” the firm said.

“On a quarterly basis, we continue to forecast a recovery that looks U-shaped in year-on-year terms but V-shaped in sequential terms, with quarter-on-quarter annualized GDP growth rates averaging -32% in Q2, +16% in Q3, and +13% in Q4 across the advanced economies,” the firm noted.

To catch a global rise that feeds into equities, ETF investors can consider VT. VT seeks to track the performance of a benchmark index that measures the investment return of stocks of companies located in developed and emerging markets around the world.

The fund employs an indexing investment approach designed to track the performance of the FTSE Global All Cap Index. The advisor attempts to sample the target index by investing all, or substantially all, of its assets in common stocks in the index and by holding a representative sample of securities that resembles the full index in terms of key risk factors and other characteristics.

Another interesting all-world play that hedges against currency fluctuations against the U.S. dollar is the Xtrackers MSCI All World ex U.S. Hedged Equity ETF (DBAW A). DBAW seeks investment results that correspond generally to the performance, of the MSCI ACWI ex USA US Dollar Hedged Index.