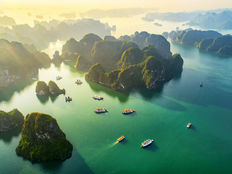 3 Reasons to Be Excited About Vietnam ETF

The VanEck Vectors Vietnam ETF (VNM B), the lone US-listed exchange traded fund dedicated to Vietnamese stocks, has recently been ensnared in international headline risk, but some analysts see reasons to be excited about the fast-growing Southeast Asian economy.

Fitch Ratings recently boosted its outlook on Vietnam’s credit rating to Positive from Stable while reiterating a BB rating.

What’s Next for Vietnam Investing

“The authorities are maintaining their policy focus on macroeconomic stability. GDP growth improved to 7.1% in 2018 from 6.8% in 2017 while inflation remained stable at 3.5%, within the National Assembly’s target of below 4%,” according to Fitch. “Growth remained supported by strong foreign direct investment (FDI) into the manufacturing sector as well as expansion in the services and agriculture sectors.”

VNM allocates a combined 42.50% of its weight to real estate and financial services stocks. The ETF also features robust exposure to the Vietnamese consumer as the consumer staples and discretionary sectors combine for 26.60% of the fund’s weight.

“We expect growth to slow in 2019 to around 6.7%, still within the National Assembly’s target of between 6.6% and 6.8%,” said Fitch. “Growth in Vietnam, which has a high degree of trade openness, is likely to be affected by slowing global growth and US-China trade tensions, which will weigh on regional trade flows and sentiment. Vietnam would nevertheless remain among the fastest-growing economies in the Asia-Pacific and in the ‘BB’ rating category globally.”