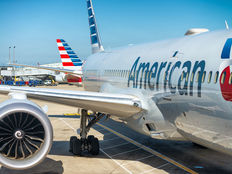 The U.S. Global Jets ETF (JETS C), the lone ETF dedicated to airline stocks, is up more than 12% year-to-date, but some analysts believe the market is not fully appreciating improving balance sheets and debt reduction efforts at many of the major airlines

Beyond ancillary fees, the airline industry is seeing greater opportunity to expand in international markets, especially in the developing economies where they may experience greater tourism, expansion of route networks and new aircraft orders. Air passenger demand is quickly rising as a growing middle-income class exhibits increased discretionary spending.

In years past, airlines earned a well-deserved reputation for poor business management,” reports Teresa Rivas for Barron’s. “Yet in the past decade carriers have made significant strides in being more disciplined spenders and paying down debt—something that the market hasn’t caught onto yet, argues Macquarie.”

JETS follows the U.S. Global Jets Index, which uses fundamental screens to select airline companies, with an emphasis on domestic carriers, along with global aircraft manufacturers and airport companies.

Susan Donofrio reiterated her bullish stance on seven of the U.S.’s nine major carriers, arguing that in ‘the past ten years, airlines have been good stewards of capital and have shown improvement as far as paying down debt and expanding earnings before interest, taxes, depreciation, and amortization margins when compared to other industries,’” according to Barron’s.

Donofrio has long been bullish on the group, and she isn’t the only one to make this argument,” reports Barron’s. “In the past year we’ve seen several analysts argue that airlines truly have changed. Of course, others point to the fact that these reforms have coincided with a decade-long bull run, so the thesis has yet to be truly tested.”