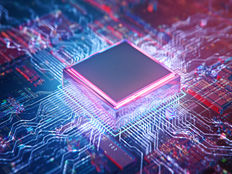 The VanEck Vectors Semiconductor ETF (SMH A-) entered Friday with a month-to-date loss of 16.35%, but if some seasonal trends hold true to form, the battered chip fund could see some near-term relief as soon as the week after the Memorial Day break.

U.S. semiconductors were among the hardest hit in the wake of the Huawei blacklisting as chipmakers lost a big customer in Huawei, the world’s largest provider of telecommunication equipment, which purchased about $20 billion in semiconductor chips each year.

“Looking at S&P 500 Index stocks over the past 10 years, a handful of chip names made the list,” according to Schaeffer’s Investment Research. “However, AVGO has racked up the biggest average gain over the past 10 years, rallying an impressive 3.06% in that four-day stretch, per data from Schaeffer’s Senior Quantitative Analyst Rocky White. Further, since its debut in late 2009, the tech name has ended the week higher more than three-quarters of the time.”

“AVGO” is the ticker for Broadcom, SMH’s sixth-largest holding.

“A post-holiday rebound would be a much-welcome sight for Broadcom shareholders. Amid escalating trade tensions between the U.S. and China, semiconductor stocks have been crushed in May,” notes Schaeffer’s. “AVGO, specifically, has already shed 18.6% so far this month, bracing for its worst monthly loss ever.”

The good news is that of the 25 best-performing S&P 500 stocks during Memorial Day week, six are semiconductor names, including Broadcom and many of those six are among SMH’s 25 holdings.

Semiconductor have exhibited high sensitivity to the trade war because China is a strong driver for the chip-making sector, which includes several fast areas of growth including gaming and artificial intelligence. If the trade war is renewed, the barriers will raise costs for many of these multi-national companies.

“The semiconductor industry is expected to see demand pick up significantly in the second half of 2019 after gradually hitting the bottom, and Taiwan can compete well in the global market with its comprehensive IC supply chains, according to Bough Lin, chairman of Siliconware Precision Industries (SPIL), an affiliate of ASE Technology Holding,” reports DigiTimes.

Some market observers believe the rally in chip stocks can continue, particularly if investors remain enthusiastic about 5G. 5G technology will use a higher frequency band versus the current 4G technology standard, resulting in faster transmission of data.

For more information on the tech sector, visit our technology category.