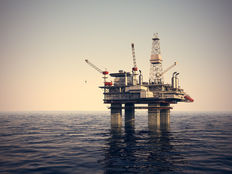 Investors expecting oil or gas prices to rally might want to consider adding exposure to upstream companies involved in exploration and production, as offered by VanEck Vectors Unconventional Oil & Gas ETF (FRAK B-), whereas those who believe crude oil prices may fall or that demand for refined products will rise might consider exposure to downstream refiners and marketing companies, such as VanEck Vectors Oil Refiners ETF (CRAK ).

Oil services stocks are usually highly correlated to oil prices, but some analysts believe if oil prices falter, that is an opportunity to get involved with oil-field services providers, which investors can gain exposure to via VanEck Vectors Oil Service ETF (OIH B+).

Per OPEC data available for 2018, China and China dependent Asia-pacific countries accounted for about 21 percent of the global oil demand. If the trade war progresses, it is reasonable to expect a slowdown in China’s economy. All else equal, if investors fear a slowdown in China could lead to a decrease in the global demand for oil; it might be a good time to consider oil refiners. Historically, economic slowdowns have negatively impacted crude oil prices and widened the crack spread. As the input for refiners gets cheaper it boosts their profit margins and improves their profitability.

Looking ahead, the U.S. Energy Information Administration (EIA) cut its forecasts for 2019 world oil demand growth and U.S. crude production in light of the growing trade tensions between the world’s two largest economies. Trade tensions also weighed on the energy market Wednesday after U.S. President Donald Trump said he was pushing back a trade deal with China.

Stabilizing crude oil prices and potential production increases from U.S. shale producers could also bolster the case for North American refiners. The U.S. refining sub-sector has been one of the most profitable sectors in the U.S. economy over the past five years.

Production cuts from OPEC and their allies have largely contributed to the cut in supply. Meanwhile, expanding economies around the world has bolstered demand for raw materials such as crude oil.

The industry has been plagued with high expenses and most companies are now cutting capital expenditures. It remains a hotbed of mergers and acquisitions (M&A) as smaller companies look to achieve economies of scale. Whereas, industry heavy weights look to acquire established assets in the Permian basin at attractive valuations. Investors might want to consider gaining exposure to US fracking companies to benefit from such an onset of M&A activity.

For more news and strategy on the Oil ETF market, visit our Oil category.