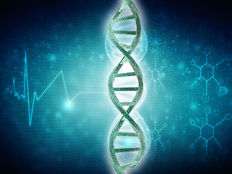 Biotech ETFs Could Use Some M&A Action

The VanEck Vectors Biotech ETF (BBH B-) is up nearly 8% year-to-date, but some industry observers are speculating that for large-cap biotechnology stocks to rally again, some more mergers and acquisitions activity will be required.

BBH holds 25 stocks and tracks the MVIS US Listed Biotech 25 Index, “which is intended to track the overall performance of companies involved in the development and production, marketing and sales of drugs based on genetic analysis and diagnostic equipment,” according to VanEck.

Some well-known biotechnology companies are trailing the broader market this year as the healthcare sector itself is disappointing investors.

“The stocks of Amgen, Gilead, and Biogen are trailing the market,” reports Josh Nathan-Kazis for Barron’s. “With the S&P 500 up 18.8% over the past two years, Amgen is up just 5.9% over the same period, while Biogen, rocked in March by the failure of a promising Alzheimer’s drug, is down 11%. Gilead, for its part, has yet to recover from its late-2018 slump, and is off 0.6% over the past two years.”

Looking For Catalysts in Biotech Space

There are supporters of the biotech space. Healthcare stocks are also showing attractive valuations relative to other defensive sectors, which are richly valued. Biotechnology historically trades at multiples that are elevated relative to broader benchmarks, but after last year’s of struggles for biotechnology names, some analysts see value with some big-name biotech stocks.

Some investors are looking for more takeovers by cash-rich large-cap biotechnology companies.

“Despite their struggling share prices, the big three remaining biotech firms have plenty of cash available to fund big acquisitions. Gilead leads the pack, according to JPMorgan analyst Cory Kasimov,” reports Barron’s. “Kasimov’s figures, with $30 billion in cash, plus a free cash flow of $43 billion over the next five years. All told, Gilead, Amgen, and Biogen taken together have $61 billion in cash, and a free cash flow of $112 billion through 2023.”

Biotechnology historically trades at multiples that are elevated relative to broader benchmarks, but after last year’s of struggles for biotechnology names, some analysts see value with some big-name biotech stocks.

“Further clues can be found in management commentary from the big firms appended to Kasimov’s report. In one quote from the first quarter of this year, a Gilead executive suggested that the firm would focus acquisition efforts on companies specializing in liver diseases and HIV, areas in which Gilead has an expertise,” according to Barron’s.

For more information on the biotech sector, visit our biotechnology category.