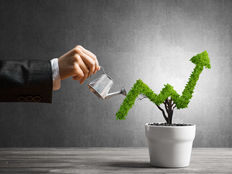 “In June 2019, Reuters published that green bond issuance for the year had surpassed USD 100 billion, which extolled a milestone of the first time the green bond issuance pace had reached the USD 100 billion mark by the first half of the year,” S&P Dow Jones Indices said in a recent note. “Issuance could be on track to double by the end of the year. Since the end of June, USD 90 billion more has been issued, bringing the 2019 total to USD 212 billion in issuance as of October 2019.”

While green bond issuance in 2018 was only modestly higher than 2017’s issuance, new green bond issues could rise to $250 billion this year, according to VanEck data. That number could be significantly higher in 2020.

“Currently, the green bond market is small when compared to the overall fixed income market. Issuance continues to increase along with the diversity of issuers,” said S&P Dow Jones. “The existence of the green bond market and the S&P Green Bond Index is a start, but if capital markets are to meet the needs of the environment and reversing the damages of climate change, the scale of investment capital would have to be exponentially larger in order to meet the challenge.”