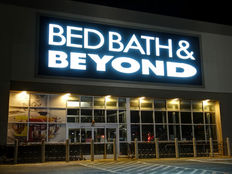 Bed Bath & Beyond Inc. (BBBY) is having a rough morning Wednesday, still down over 23% after the company’s decision to announce disappointing same-store sales figures well in advance of its fourth-quarter earnings release.

“We are experiencing short-term pain in our efforts to stabilize the business, including the pressures of store traffic trends coupled with our own executional challenges,” CEO Mark Tritton said in a statement.

Wall Street analysts had been anticipating a drop of a more modest 3.97% for the fiscal fourth quarter, so this came as quite a shock ahead of earnings.

Although it is set to report full fourth-quarter numbers on April 15, Bed Bath & Beyond said in a statement it decided to announce the sales figures “to provide visibility into the current pressures on the business.”

“Whatever advice he got from what lawyer, from the chairman, I think all those people need to be broomed and broomed yesterday,” Cramer said on “"Squawk on the Street":https://www.cnbc.com/squawk-on-the-street/.”

Despite the torrid drop however, Cramer believes that this could be a buying opportunity for investors with an interest and available capital, saying, “I would buy it.”

Other analysts are less sanguine however.

“This represents a discouraging start to the Tritton era,” Wells Fargo analyst Zachary Fadem said. “And while it’s widely understood that a Bed Bath & Beyond turnaround would be no easy task, we believe it’s safe to say that [near-term] improvement appears increasingly unlikely at this point.”

While it is still unclear how the stock may affect home goods ETFs on a longer-term basis, the VanEck Vectors Retail ETF (RTH B+), the First Trust Consumer Discretionary AlphaDEX ETF (FXD A-), and the SPDR Series Trust SPDR Homebuilders ETF (XHB A+) are all potential beneficiaries of both positive and negative news for BBBY, given their healthy allocations of the stock, and investors who agree with Cramer might consider using those ETFs if looking to add the company to their portfolios.