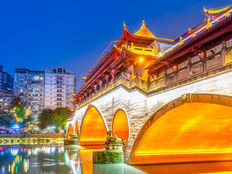 China country-specific exchange traded funds continued to rally Friday, with Chinese markets enjoying one of their best weeks in months, as stimulus measures help counterbalance the selling on coronavirus fears.

Among the best performing non-leveraged ETFs of Friday, the VanEck Vectors ChinaAMC CSI 300 ETF (CNXT ) gained 2.0% and Xtrackers CSI 500 China A-Shares Small Cap ETF (ASHS B) increased 2.4%. Over the past week, CNXT was up 4.2% and ASHS was 3.9% higher.

China continues to struggle in containing the coronavirus outbreak that has infected over 70,000 and claimed the lives of 2,000. The country reported an uptick in new cases of coronavirus Friday, but the number of infections slowed since January, a downward trend that the World Health Organization has called encouraging.

Meanwhile, the Chinese commerce ministry said it will push forward new fiscal, tax financial, insurance measures to further strengthen companies in an attempt to counter the negative economic impact of the epidemic after many businesses have shutdown and foot traffic in major cities have dwindled.

The People’s Bank of China has already cut a key benchmark rate this week and it will extend credit, provide favorable loans or rates to companies actively involved in controlling the epidemic.

“Additional easing measures, if announced, could sustain the positive sentiment even longer and lead to near-term A-share outperformance versus the offshore Chinese equity market,” Morgan Stanley’s analysts said in a note on Friday.

However, the rest of the world did not enjoy a similar boost Friday as U.S. markets sold off on fears of the growing economic impact of a spreading coronavirus.

“Anxiety over potential COVID-19 outbreaks outside China is now emerging as a growing concern for investors amid news of a rise in infection numbers outside of China while a change in virus diagnostic in China along with reports of rising number of infections in Beijing did not help the mood either,” Rodrigo Catril, senior foreign exchange strategist at National Australia Bank, said in a note, CNBC reports.