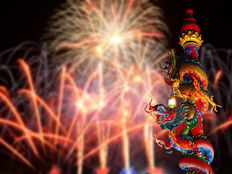 The Shanghai Composite Index jumped 2.6% on Tuesday, the most since May 10, though the benchmark is still down about 10% in the past two months, Bloomberg reports.

Construction-related stocks led the charge after the finance ministry revealed it would ease restrictions on the spending of proceeds from special bond sales and encourage banks to offer loans to projects funded by such debt.

Local governments utilize the funds raised as equity capital for major infrastructure projects. They were previously required to fund the minimum equity ratio requirement, usually 20% to 30% of total investment in the project, themselves, South China Morning Post reports.

Chinese markets have weakened in recent weeks on an escalation in the trade dispute with the U.S., with the small-cap ChiNext Index dipping into a bear market last week.

In response to the perceived weakness, the Chinese government stepped up with stimulus measures, such as the one recent infrastructure plans, to strengthen an ailing outlook.

“Lower restrictions in the use of special bond sales by local governments is giving the market, particularly in infrastructure-related sectors, some support,” Gerry Alfonso, director of international business department at Shenwan Hongyuan Group Co, told Bloomberg. “Food and agricultural names also rallied with the outlook remaining strong in that space.”

Looking ahead, Alfonso argued that no major developments will occur in the U.S.-China trade war until the Group of 20 meeting later this month. President Donald Trump said tariffs on Chinese imports could be further increased if President Xi Jinping does not meet him at the summit in Japan.