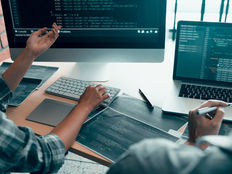 The iShares North American Tech-Software ETF (IGV B+) is lower by nearly 5% this month, indicating that high-flying software stocks have been stung by the trade war with China, as has been the case with other groups within the technology space.

IGV seeks to track the investment results of an index composed of North American equities in the software industry and select North American equities from interactive home entertainment and interactive media and services industries. The fund generally invests at least 90 percent of its assets in securities of the underlying index and in depositary receipts representing securities of the underlying index.

While IGV has recently struggled, some market observers remain fans of the software setup, even if a mild recession comes to pass.

“Recent history leads us to believe that this is the only kind of recession possible, but throughout time we’ve had mild recessions, particularly during secular bull markets that were spurred by technological innovation and growth,” according to Schaeffer’s Investment Research. “One sector that leads me to believe we could be in this scenario and has surprisingly stood out well during the recent volatility, is the software services sector.”

While healthcare and consumer staples are the go-to sectors in a recession, technology can still thrive even in a market downturn. As such, investors might want to consider taking a closer look at technology exchange-traded funds (ETFs) as a value-infused option.

Even while the Federal Reserve is cutting interests as their outlook on economic growth dampens, technology can still thrive. In fact, low rates can be good for large tech companies.

“As a proxy, I like to look at the iShares Trust Expanded Tech-Software Sector ETF (IGV – 212.72). You would suspect that this sector would be underperforming if we were indeed headed for a much larger bear market or recession, yet it still is outperforming the broader equities market by 7.35 percentage points year-to-date,” according to Schaeffer’s.

“What’s more, when you look at the underlying holdings, many leaders still look strong from a technical standpoint. This sector has arguably been the best-performing area of the market over the past few years, and valuations are very rich, yet investors still seem to have a bid for growth even amidst uncertain times.”