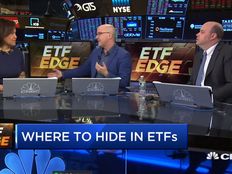 To start things off, Coombs asked about the best ways for investors to protect themselves. Nadig suggested two strategies: reposition or hedge.

For repositioning, Nadig explained that gold is one of the obvious plays to rely on. He said the SPDR Gold Trust (GLD A-) is undoubtedly popular, adding cheaper funds exist as well such as the Aberdeen Standard Physical Gold Shares ETF (SGOL A) or GraniteShares Gold Trust (BAR A-). That in mind, Nadig also believes it to be more interesting to think about other ways of staying invested in the market.

“That can mean something as simple as looking at sectors of the market that may be a little immune to an ongoing concern about supply lines,” Nadig noted.

Rosenbluth added there are safer ways to approach investing from a sector level as well. He said investors could look to utilities with a fund like the Utilities Select Sector SPDR Fund (XLU A), real estate, or lower volatility orientated ETFs such as the Invesco S&P 500 Low Volatility ETF (SPLV A+) or the iShares Edge MSCI Min Vol U.S.A. ETF (USMV A+). Focusing on these sorts of funds means seeing reliance on more defensives, with heavier weightings on these more stable sectors. Some exposure will remain for the more cyclical ones, so existing in the market is still possible. That said, there will be more protection for the downside, as opposed to shifting to fixed income with a mint product.

The question then becomes a matter of what else there is to worry about. The market is finally reacting, which has been expected by many for some time, despite a lack of talk in the first quarter. That in mind, it’s not as though it’s a significant change. As Nadig pointed out, these are still the same prices that were seen a couple of weeks ago.

“It may feel like a big correction right now, but it’s just a two week Groundhog Day,” Nadig said.

As Rosenbluth also pointed out, there will likely be more selling, leading to a reasonably quick bounce back. That said, the market is likely to be choppy until there’s great clarity of what lies ahead.

In terms of whether or not shorting some of these ETFs is an option, Nadig believed that’s purely a tactical strategy that shouldn’t be considered now (yesterday would have made sense). So, there’s an understandable reluctance to either go for whatever’s left at the bottom or believe there’s a guaranteed win on a short due to a speculative 10-day downturn.