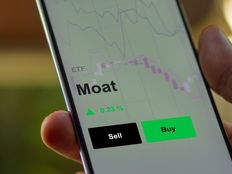 Jaffe sees wide moats as interesting but not necessarily intuitive play given the current market environment.

Lydon noted that many investors have money on the sidelines and are trying to figure out if they should come into the market with that money and how. “Its really important that you have some type of idea of, when trends change, what do you buy,” Lydon noted, observing that quality stocks are a good bet at times like these. He continued, “the wide moat index is just chock full of quality stocks. I look at this index as the Warren Buffet index.”

The index includes companies such as Kellogg’s, BlackRock, Boeing, and Etsy. “These companies themselves have done a great job over time building up that moat, and their moats keep getting bigger and bigger,” Lydon said.

The fund has a 5 star rating from Morningstar. Jaffe pointed out that over the last decade there was stretch between 2014-2019 that MOAT never vacillated out of being in the top 15% of its peer group, frequently being the number one fund in terms of returns. However, in other years, the fund can be significantly below average. “Is this a bit of a feast or famine?” Jaffe wondered.

“Coming out of the financial crisis, if all you did was buy the S&P, you did really well,” Lydon said, pointing out that it has only been in the last couple of years the FAANG stocks got roasted. Lydon sees the FAANG stocks as still having a heavy weighting in the S&P, and MOAT offers a chance to have similar quality stocks in sectors aside from technology that can help investors diversify their portfolios. “Diversification is important,” Lydon said, “although you feel diversified with the S&P 500, we know for a fact that, because of the heavy weighting in just a few companies, you are not as diversified as you think.”