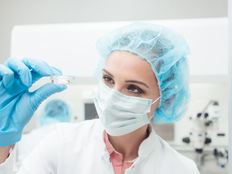 Expect Plenty From Biotech ETFs in 2020

Biotechnology ETFs, including the VanEck Vectors Biotech ETF (BBH B-), were laggards for much of 2019, but that scenario rapidly changed at the start of the fourth quarter. Since the start of the current quarter, BBH is higher by nearly 15% and some market observers believe biotechnology assets can keep soaring in the new year.

BBH seeks to replicate as closely as possible, before fees and expenses, the price and yield performance of the MVIS® US Listed Biotech 25 Index (MVBBHTR), which is intended to track the overall performance of companies involved in the development and production, marketing and sales of drugs based on genetic analysis and diagnostic equipment.

“As other analysts have also argued in recent weeks, the fundamentals of the sector look strong,” reports Jonathan Nathan-Kazis for Barron’s, citing Wedbush analyst Laura Chico. “Biotech surged in the third quarter, approvals from the Food & Drug Administration are coming through above the average annual rate, the valuation of large-cap biotechs are attractive, and there have been significant mergers and acquisitions in past years.”

There are supporters of the biotech space. Healthcare stocks are also showing attractive valuations relative to other defensive sectors, which are richly valued. Biotechnology historically trades at multiples that are elevated relative to broader benchmarks, but after last year’s of struggles for biotechnology names, some analysts see value with some big-name biotech stocks.

Biotechnology historically trades at multiples that are elevated relative to broader benchmarks, but after last year’s of struggles for biotechnology names, some analysts see value with some big-name biotech stocks.

The issue for BBH and friends in 2020 could be election year impact.

“The Nasdaq Biotechnology Index (ticker: NBI) has a mean annual return of 5% in election years since 2000, versus 12% in non-election years. That is a small sample, to be sure, but the election will bring a number of worries for biotech investors, including policy proposals over drug pricing,” according to Barron’s.

Recent data suggest investors are willing to bet on biotech ETFs over the near-term as market participants have recently been stepping back into funds tracking the space after months of outflows.