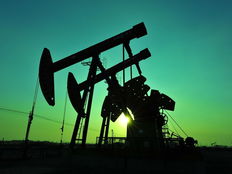 The SPDR S&P Oil & Gas Exploration & Production ETF (XOP B+) is one of the more volatile ways for investors to tap the energy patch. Due to exploration and production stocks historically being highly sensitive to oil’s price gyrations, XOP can be a turbulent bet as highlighted by the fact that the ETF has lost more than half its value over the past year.

A decline like that underscores the point that betting on exploration and production equities can be a risky gambit, but there is some good news in the form of rising dividends in the E&P space. Those growing payouts are made possible by the industry’s improving balance sheets.

Potentially adding to the allure of XOP for risk-tolerant investors is the energy’s sectors current status as a credible value destination. Investors may want to focus on companies with exposure to U.S. shale formations as those firms bolster their balance sheets and contain costs.

The markets have been roiled by the U.S.-China trade war news, which looks like it could extend into extra innings. Furthermore, the bond markets were flashing recession signals from an inverted yield curve. However, many energy stocks have baked in these scenarios and currently look attractive on valuation.

However, there are plenty of risks lingering for XOP and E&P equities.

“Oil companies have been raising dividends as they have produced more cash, but it doesn’t seem to be enough to attract investors,” reports Barron’s. “One problem for the industry is that the overall S&P 500 still has a better free-cash-flow yield than oil producers, without the commodity-related price risk they face.”