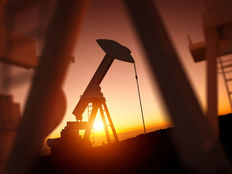 For The Daring, Find Value in Oil Services

With oil prices slumping to start 2020, the VanEck Vectors Oil Services ETF (OIH B+) is being pinched, but it could be nearly a point of capitulation while offering some value.

OIH seeks to replicate as closely as possible the price and yield performance of the MVIS® US Listed Oil Services 25 Index. The index includes common stocks and depositary receipts of U.S. exchange-listed companies in the oil services sector. Such companies may include small- and medium-capitalization companies and foreign companies that are listed on a U.S. exchange.

“Shares of oil-related companies did not keep pace with the price of crude oil during the rally that lasted from early October through January 8. The weak performance came during a period when the stock market was flying higher. Almost any company with a ticker was moving to the upside,” according to Seeking Alpha.

A decline in China’s economy as a result of the virus and traveling would impact demand since China is the world’s largest crude oil importer, after importing a record 10.12 million barrels per day in 2019, according to data from the General Administration of Customs. The massive Asian country is also the second-largest oil consumer, behind the United States.

There are still some interesting to give OIH a look.

“At $11.24 per share on Wednesday, January 29, the OIH ETF product was just 48 cents above the double-bottom low. Schlumberger, Halliburton, and Baker Hughes are all profitable companies that pay attractive dividends to shareholders,” according to Seeking Alpha.

Oil’s decline is particularly noteworthy, as even traditionally bullish events like the inventory report, which showed that inventory fell by 400,000 barrels for the week ending Jan. 17, compared with analyst estimates of a 500,000 barrel buildup, according to S&P Global Platts, has done little to curb selling.

“The bottom line on the diversified OIH product is that it eliminates idiosyncratic risk in the sector, pays an attractive dividend, and is trading at a price that screams value in a market where that attribute is hard to find these days,” reports Seeking Alpha. “At $11.24, the downside risk in OIH is not excessive. While a stop below the double-bottom could make sense on a technical level, I would be inclined to add to a long position if the price of the ETF declined even lower.”