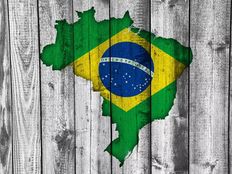 Get Bullish on Brazil With BRF

Simply because Chinese and Russian stocks are slumping this year, that doesn’t mean the same applies to all major emerging markets.

Take the case of Brazil. Stocks in Latin America’s largest economy are soaring, even small-caps. Just look at the VanEck Vectors Brazil Small-Cap ETF (BRF A-), which is higher by 18.12% year-to-date. In its own right, that’s an impressive performance, but it’s even more so when considering that the exchange traded fund is rallying while the MSCI Emerging Markets Index and the MSIC Emerging Markets Small Cap Index are lower this year by 8.27% and 5%, respectively.

Even with the strength displayed by Brazilian equities through the first three and a half months of 2022, some analysts believe that the country’s stocks offer more upside and that it’s one of the more attractive developing economies for investors to consider today. Some of that bullish outlook is attributable to Brazil’s status as a major commodities exporter.

“Brazil accounts for 22% of global iron ore exports with 6% of the world’s nickel production and pulp shipments coming from Latin America. LatAm also accounts for more than 50% of the global orange juice, soy oil, and coffee exports,” says Bank of America.

BRF has some leverage to the soaring commodities theme as the energy and materials sectors combine for 11.3% of the ETF’s roster. However, there are other reasons to consider Brazil. It’s not just the region’s biggest economy. It might be the most compelling today for investors.

“It’s worth noting that Brazil comprises ~64% of Latin American equity benchmarks. David Beker is overweight Brazil on potential earnings growth, attractive valuations, and a value bias. David is slightly underweight Mexico given slower activity and valuation and has no exposure to Peru or Chile due to elevated political risk,” adds the bank.

Two points for investors to ponder. First, Latin American equities, including Brazilian stocks, are coming off a lengthy period of underperformance. Second, many of the reasons for that laggard status are fading, indicating BRF could offer more upside for risk-tolerant market participants.

“Our strategists suggest that LatAm underperformance to this point can be at least partially explained by a string of recessions, political uncertainty, and devastating Covid waves (27% of global deaths and 14% of global case counts vs. only 8% of global population),” notes Bank of America.

BRF, which turns 13 years old next month, holds 108 stocks. The consumer discretionary and industrial sectors combine for over 36% of the fund’s roster.